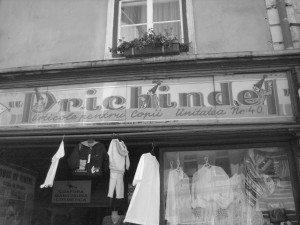 This article was translated by Iulia Marusca and published in the Hotnews  blog “Contributors”.

I’m reading a book that has helped me crack a mystery that has troubled me for 20 years: why do I live and work in Romania?  People have been asking me this question since 1990 and my answers – “the people…the warmth…the challenges…” – always sound a bit unconvincing.  I am strangely unable to explain what it is that keeps me here.

Anthony Bourdain, author of Kitchen Confidential, which is one of the funniest books I’ve ever read, gave me the answer even though he doesn’t mention Romania once in the book.  He describes the madness of investing in the restaurant business in New York City:

“To want to own a restaurant can be a strange and terrible affliction. What causes such an urge in so many otherwise sensible people?… You must be fluent in not only Spanish but the Kabbala-like intricacies of health codes, tax law, fire department regulations, environmental protection laws, building code, occupational safety and health regs, fair hiring practices, zoning, insurance, the vagaries and back scratching of liquor licences, the netherworld of trash removal, linen, grease disposal. And with every dime you’ve got tied up in your new place, suddenly the drains in your prep kitchen are backing up with raw sewage, pushing hundreds of tons of impacted crap into your dining room; your coke addled chef just called that Asian waitress whose working her way through law school a chink, which ensures your presence in court for the next six months; your bartender is giving away the bar to underage girls from Wantagh, any one of whom could crash Daddy’s Buick into a busload of divinity students, putting your liquor licence in peril, to say the least; there’s the ongoing struggle with rodents and cockroaches, any one of which could crawl across the Tina Brown four-top in the middle of a dessert course; the dishwasher just walked out after arguing with the busboy, and they need glasses now on table seven;  immigration is at the door for a surprise inspection of your kitchen’s green cards; the produce guy wants a certified check or he’s taking back the delivery; you didn’t order enough napkins for the weekend—and is that the New York Times reviewer waiting for your hostess for stop flirting and notice her?”

A similar description could be made about Romania: why would anyone want to run a business in a country where government agencies send armies of inspectors to healthy businesses, like swarms of locusts, seeking out bribes, free meals, free produce and – if neither are forthcoming in the quantities expected – immediate payment of draconian fines for laws that were probably dreamt up the week before by a government that can issue hundreds of “emergency laws” in a late night session, laws that don’t need parliamentary approval and that can go into immediate effect; with a judiciary that is so ineffective that it has never managed to convict even one of the tycoons that gained control (allegedly by illegal means) of swathes of the economy and the media (and some would say the government); where the health, educational and social services are in such a state of bankrupcy that if you end up in hospital for an operation you have to buy your own drugs and heavily bribe the doctors, surgeons, nurses – even the cleaners – if you want to emerge in one piece; a country that has only managed to build 100km of motorway (at huge expense) over 20 years, whereas China (which also had no motorway in 1990) has managed to build almost 50,000 km.

Within the Romanian context of legislative unpredictability, low wages, high costs, bankrupt public services, and hordes of rapacious inspectors roaming the streets, you can understand why Romanians despair about their homeland and would welcome the opportunity to go west.  And within their mindset of cynicism, resignation and despair it is logical to ask a foreigner like me “what the hell are you doing in a place like this?”

I first came to Romania in 1986 and it was a horrible experience. Never have I seen such a sad and desperate looking people. Nobody would look at me or even speak to me and I thought I had discovered the worst country on earth. I hated it. But when I came back in early 1990 I discovered that the Romanian people are really open, warm and communicative – despite the superficial appearance of hostility they use in shops and restaurants.  I was hooked.  For the last 20 years I’ve felt more at home here than I do in UK or in the other parts of SE Europe that I lived in during the 1990s.

Reading that book by Bourdain made me realise that Romania, rather like the restaurant business, is a hostile place to do business in.  But then again many countries have terrible bureaucracies, even places like Germany. And while most people should perhaps be warned off, there are some people like me who thrive on it. Working in Romania is one challenge after another: I have worked on some really big issues like the development of child rights and Roma policies and recently I published an article in Time about a mass grave of Jews from 1941 (in Iasi).

From the creative point of view Romania is a lot more interesting than the west and, as a writer and amateur photographer (and sometime filmmaker) it is an ideal location as there is so much interesting material here. It is also the ideal place for anthropologists, sociologists, historians, ornothologists, environmentalists – as things are more “unspoiled” (in terms of modern forces changing traditional structures).  I recently compared my photos from Romania with those from Western Europe and the Romania shots are much more unusual. I have many interesting shots of shop fronts – some of which are hand painted – and unique old fashioned signs; in the west these would be mass manufactured, modern or retro – certainly not worth photographing.

7 Responses to Why Romania?