Invest in education for Roma minority

A massive investment in education is the only way that the huge Roma minority in Romania can emerge from grinding poverty and marginalisation. If better educated, the Roma people could fill the gap created by the country’s falling population and provide future generations of entrepreneurs, scientists and skilled workers.

Estimates of how many Roma are in Romania vary wildly. At the last census in 2001 well under a million Romanians declared th 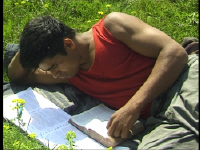 emselves to be Roma (fears of the holocaust linger on), but un-scientific estimates of 2 million or 3 million are made by Roma NGOs.

But what is clear is that Roma communities can be found on the margins of most Romanian villages and many do not have identity papers, without which you cannot access public services.

If one visits a Roma community, the real meaning of the word marginalisation becomes clear. In a typical Romanian village, the paved roads tend to stop where the Roma community begins.

They have to cope without the utilities and public services which their non-Roma neighbours are routinely provided with. If children from these communities go to school they are discriminated against relentlessly and many drop out.

The Romanian people are tolerant of the Roma way of life and public officials tend to make little or no effort to offer public services (or identity cards) to these marginalised people.

The prevailing attitude is “they don’t want to work or study; they live off crime; so we leave them alone.” Most Romanian journalists seem to share these views.

Education is the only answer

Experience in other EU Member States has shown that dealing with Roma poverty is difficult and results are intermittent. The prejudice is so deeply rooted and the problems are so widely spread that well-meaning social projects tend to have limited impact. And the Roma leaders lack the education required to provide the right kind of leadership that the Roma minority so obviously need.

The Romanian Government allocate about €2 million a year to the Roma Party, ostensibly to help the Roma people. Unfortunately this money does not reach the people who need it and only a small cadre of politicians know where this money actually goes. If this cash were used to provide Roma children with school bursaries, it could have a big impact.

Education is the only answer. Only a massive and sustained investment in education can ensure a solution that is acceptable to both the Roma minority (who jealously preserve their cultural independence) and mainstream society which desperately needs well educated people to replace those who are emigrating west.

There are a number of compelling reasons why a long term educational investment programme is the only possible answer.

Concentrating ones resources on one sector is far more likely to lead to a positive result than investing small sums in a wide range of projects. Prioritising education is something that is easy to understand for illiterate villagers and the most bone-headed public officials.

If food, books and uniforms were provided free the main reasons for educational exclusion would be swept away.

Romania has actually made good progress in getting marginalised Roma children into primary schools, and Gheorghe Sarau at the Ministry of Education has made heroic efforts to hire Romanes language teachers into Romanes speaking areas.

Their job is essentially to teach the Roma kids the Romanian language. The problem is that this programme is not backed up by any investment in schools in Roma villages.

Sarau has declared that getting a Roma child into primary school for even just one year has long term effects. “When this child becomes a parent he or she will understand the value of sending their children to school.”

But Romania’s educational system is an elitist one and what limited resources are available seem to be concentrated on the best performing schools in the big cities. Rural schools tend to be completely neglected, particularly those schools which have a majority of Roma children.

A big part of the problem is the fact that Romanian politicians tend to ignore and belittle their peasant population, despite the fact that almost half the population live off the land. The media share this disdain for their rural brethren and when they do report from a village the people tend to be treated as victims or with irony.

The Roma minority are currently perceived in Romania as a social problem and a source of national shame, but if there was a sustained investment programme in the education system the Roma minority could become part of the solution.

This article was also published in EUObserver.

6 Responses to Invest in education for Roma minority