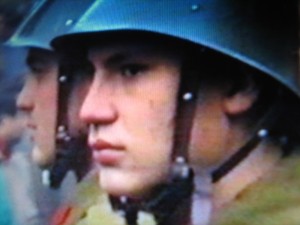 The first thing one must do when making a documentary film is to research the subject. This involves watching any existing films as well as footage (unedited film) and making sure you get your facts right about what was going on at the time. First step was to find the documentaries that were made about the 1989 Revolution and I assumed there would be several Romanian productions to choose from.

To my amazement I have not been able to find a Romanian documentary about the events of December 1989. This is inexplicable considering that documentaries are made in Romania every year. TVR and the National Film Archive at Jilava have a rich collection of material that was filmed from the 22nd of December 1989 onwards and, according
to the archivist at CNC, Romania’s national cinematography centre, 11 teams of filmmakers were sent out from Buftea Film Studios to document the events as they were unfolding. The archivist told me that TVR didn’t make a documentary at the time as they didn’t want to “inflame public opinion”.

TVR’s archive is particularly interesting considering the extraordinary scenes that took place in their news studio on 22nd December 1989, scenes of anarchic democracy with Mircea Dinescu, in his disintegrating jumper, at the forefront; scenes that shocked the world with their immediacy. Never before (or since) have we seen un-rehearsed,
unscripted, uncontrolled (and inspiring) scenes like that on TV.

Romanians have been asking themselves the same question for the last 20 years: was it or wasn’t it a revolution? A lot of people still believe in the conspiracy theory that the whole thing was a coup d’etat organised by the Russians. Others ask “who was shooting into the crowd in December 1989?” and now, 20 years later, nobody has been
charged, let alone convicted, for their role in the bloodiest regime change of that tumultuous year.

I spoke to several filmmakers, as well as a couple of TV station editors, expecting to be told “you must see the film by ….” But no, they all said the same thing: there is no Romanian documentary film about the 1989 Revolution. There are plenty of foreign productions and there is a Romanian in Paris (Paul Cozighian) who made a short film about 1989 for French TV, but it’s never been screened in Romania. And I was told about a documentary about Timisoara
in 1989, by Bose Ovidiu Pristina, but the film seems to be unobtainable and the filmmaker has unfortunately died.

The archivist at CNC explained that the BBC bought much of TVR’s footage and made a documentary, and many people mention the German production “Videogramme from a Revolution” — consisting of material shot almost entirely by Romanian cameramen.

But “Videogramme from a Revolution” is a really boring film. It may have footage from all the key moments of the revolution but its narrative is like a voice from the grave, as if the speaker is contemplating suicide. And it also has that unfortunate quality that many documentaries have: looking at the issue from afar, from a comfortable armchair, very remote from the situation they are describing. This sense of comfort and superiority is what makes most
documentaries so static and boring.

I came across this sense of foreign superiority recently on YouTube, when I saw an ITN (Independent Television News) report from 1990. Brent Sadler, a sincere and humourless presenter, crouches by a tank (pretending he’s in a war zone) and describes what’s going on in Bucharest. He then appears in the chair of the official news reader,
in TVR’s newsroom, as it was in December 1989, complete with Romanian flag and bad taste furniture. He talks as if reading the news, but doesn’t explain what the hell he’s doing in the chair of a Communist newsreader. The camera then pans to the right and we see an old man looking embarrassed and crumpled and we realise it is the elderly TVR
newsreader who has given up his seat to this young and thrusting newsman from London. He looks as if he has been “broken” under interrogation. With no trace of irony in his voice, Brent Sadler asks the old newsreader “So! What can we expect from this new Romanian government?”

But the worst material I saw was TVR’s news footage after December 22nd 1989. The material they shot is interesting — burning buildings, tanks, soldiers, crowds on the streets — but the voiceover is nauseating. Rather than let people watch the events as they happen, events that require no explanation, the TVR newsmen felt the need to constantly talk — about the tyrant, the sacrifice, the tens of thousands killed, the bright future we can all expect now there has been a real revolution. All of this is very encouraging as it makes me realise what great material we have to work with for our film.

A Romanian translation of this article was published in Dilema Veche.

A one minute trailer from “The Stolen Revolution” can be seen on Youtube. Rupert Wolfe Murray can be followed on Twitter @wolfemurray

7 Responses to Why no Romanian documentary about 1989?