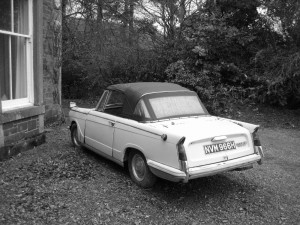 This article was also published in Romanian on contributors.ro (worth looking at for the intelligence of the comments).

When my brother Moona moved to Portugal  and started to build an eco house out of mud, stone and straw he soon realized he needed a nasty, polluting diesel van (a small sacrifice he was willing to make on behalf of the environment).  We were discussing the issue when driving towards Edinburgh, our home town, and we agreed that the cheapest place to buy a van was Belgium.  Both of us had worked in Romania  in the 1990s and we recalled armies of people traveling to Belgium and Germany to buy cheap second hand vehicles.  The idea of buying a cheap car in UK – let alone Scotland – didn’t even enter our minds.

We pulled in to a fuel station and I noticed a big white van being filled up by a couple of Sikh’s (Indian’s with turbans on their heads) who looked like they knew a lot more about vans than we did.  They told us they’d traveled up from Birmingham to Scotland in order to buy a van and my brother and I glanced at each other as if to say “these people are crazy. Why would they come here to get a van? Surely they know that Scotland is expensive?”.  But we soon realized that it was us who were deluded. The Sikh’s pointed out that Scotland is one of the cheapest place for second hand cars in Western Europe. I had no idea.  Next thing I knew, my brother Moona had bought a really good, quite new and very big Mercedes van for about 1,500 Euro.

One of the things that I have never understood about Romania is why second hand car prices are so high.  The white van I described above would probably fetch more than 5000 Euro in Romania and I’ve seen older vehicles being advertised for twice that amount.  Who’s buying these grossly over-priced heaps?  How do they set their prices?  On virtually every street of Bucharest is an old car with a sheet of A4 paper in each window with a list of optional extras (“electric windows, ABS, tinted windows, A/C, Blaupunkt stereo, heated seats”) and a price tag so huge that it brings water to my eyes.  Whenever I see an old BMW going for 10,000 Euro I think how such a vehicle would be lucky to get 10% of that value in UK.

Back home you can get a really good car for well under under 1000 Euro.  My parents just bought a Land Rover Discovery – with chunky off road tyres that are worth more than they paid for the vehicle – for about 900 Euro.  I once saw an old Land Rover in Bucharest with a piece of A4 in the window and I called up to see if he was offering a bargain.  He wanted 4000 Euro.  I said you can get them much cheaper in Britain.  He agreed, and said “but this is Romania.”

And it’s not just second hand cars that are more expensive in Romania.  Property has been grossly over priced in Romania in general and in Bucharest in particular, although the financial crisis has brought prices crashing down to earth.  And if you compare the prices on EBAY and the Romanian equivalent (www.okazii.ro) you will see that EBAY is a lot cheaper.  The only cheap second hand goods I have seen in Romania are clothes, but the irony of the network of second hand shops around Romania is that they are supplied by old clothes from Germany (the clothes are compressed, packed into trucks, delivered all over Romania and sold by the kilogramme). Where does all the old Romanian stuff go? Don’t Romanians thrown things out?  Is there some stigma attached to buying second hand stuff?

But one things is clear – despite the poverty and the obvious need for cheap goods, there is no real second hand market in Romania. Why is this?  One view is that there’s no real market in Romania in general — even though, in 2006, the EC was obliged to say that Romania had a “functional market economy” before it was allowed to join the EU.  I get the feeling that more and more Romanians are starting to feel duped by the much hyped benefits of EU accession; I think people are starting to realize that all they have done is become passive consumers in a huge market.

I didn’t really understand what a free market was until a British property agent explained the concept to me.  “In Britain” he said, “if you want to sell your house you speak to an estate agent and they will give you an accurate evaluation of your property – based on the value of the area – and if you want to sell it fast you put the price at the bottom of the price range he told you, but if time is not a problem you can set the price at the top end of the range.”  In other words there is an objective and trusted mechanism that establishes the value of properties and everyone can refer to it.  This means that everyone knows the approximate value of their property, as well as the price of a new home in a different area. To me, this is a definition of a free market.  The advantage of the British system is that it has been working for several hundred years, which is enough time to iron out the bumps.

Romania’s free market is an immature 21 year old who is struggling to recover from a hangover.  There are plenty of smart property agents who use sophisticated western systems to evaluate and sell properties, but these tend to be used only by a sophisticated few and the usual refrain from people when a property agent is mentioned is that “they are all crooks” (and it is invariably said that they are “all” crooks).  If a Romanian tries to rent or sell his property he tends to either arrange it himself or will talk to lots of agents (in Britain you can only use one), and if he does use an agent he will no doubt treat them with the utmost of suspicion – and will very rarely hand over a set of keys.

If there is a system for evaluating properties it is not trusted by most Romanians, and this is why property prices tend to vary so wildly; people selling tend to just pick a figure out of a hat and hope for the best.  Are they waiting for a rich foreigner to show up, fall in love with the place, and offer a large sum of money? Presumably this scenario happens frequently enough to feed the rumour mill and inflate people’s expectations about the true value of their property.

The other thing I haven’t seen in Romania is panic selling, which is when people sell things in a hurry because they’re going bankrupt.  This is one of the factors that keeps things cheap on the western second hand and property markets; there are always people, especially in a financial crisis, who have to get rid of their house or car as soon as possible.  They might have lost their job and they urgently need to get out of a loan contract that was signed in better days, and the need to end those monthly payments can often be more important than getting a high price.  I’ve never heard about this phenomenon in Romania but this may be because I don’t know what’s going on, but this country has been laid low by the financial crisis and there must be thousands of people in this situation. But I’ve never come across Romanian property owners, for example, who are really desperate to sell.  My experience of them is that they can afford to wait until the right buyer turns up.  Three times I tried to buy a small patch of land in the beautiful Romanian countryside and each time the owners doubled the price as soon as we expressed an interest (and each time I acted through a local, so there was no question of me being the rich foreigner).

But if there is no market in Romania how do things get bought and sold?  There is a market here but, like God, it “works in mysterious ways.”  In Britain the free market is based on trust which in practical terms means that you trust someone until they prove to be dishonest (which is rare, as dishonesty is bad for business).  In Romania the tendency is not to trust anyone until they have proven themselves to be worthy of your trust; in other words, Romanians are unlikely to trust agents, salesmen, intermediaries.  It also explains why nepotism is so strong here; many Romanian leaders think the only people you can trust are family and old friends — and this in turn explains why the public sector is filled with people with the right connections.  So when a Romanian wants to sell his house, or car, he will often avoid agencies and will try and do it himself;but he will have no professional guidance about value and he may well set the price in the stratosphere.  He may hit the jackpot, but more likely he will have the place on the market for years.

But most Romanians seem to be aware that the real markets in this country are controlled by special interests. These are markets that The Economist would call “opaque”.  Public tenders, for example, should be a competitive source of funding for road builders, construction companies and a whole range of goods and service suppliers to the public sector.  But everyone knows that Romanian public tenders are grossly manipulated by those same “special interests” and most contracts go to friends or relatives of the politicians in charge of that particular entity (even if a professional company is eventually subcontracted to actually do the work).

In my view, Romanians have an intelligent and realistic view of how a free market should function but they are trapped by the web of private-political companies that control the the Romanian market.  It is not in the interest of these people that second hand values go down; if property and car values were on a par with Western Europe what would these clans do with their second hand jeeps and villas?

I remember speaking to a stall holder at Piaza Domeni, one of the few remaining outdoor markets in Bucharest and he seemed to express the wisdom of the ordinary Romanian, an intelligent creature but one is disconnected from local power. He has no voice in Parliament, or even in the local council, and they are too fatalistic to lobby or talk to authority.  I was complaining about the constantly shrinking size of the open air fruit and veg market as illegal new constructions keep appearing. He said “if the authorities wanted to reduce the price of food all they need to do is give us stall-holders more space.  If there were more people selling fruit and vegetable here what would be the result?  There would be tougher competition and prices would have to fall”.