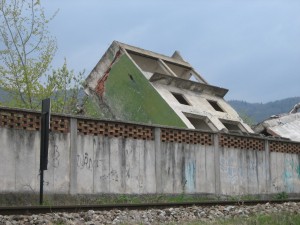 Preparing for disasters is an industry and also an attitude. There are lots of professionals flying around the world advising governments how to prepare for earthquakes, floods and natural disasters; thousands of humanitarian aid agencies rush in when disaster strikes and there are public officials everywhere whose job is to prepare the public for the worst — not to mention firemen, policemen, medical workers and soldiers who invariably form the front line of any disaster relief efforts. I have some experience of this profession.

In January 1990 I came to Romania as a journalist for the Observer newspaper. Six months later I had given up journalism (with no regrets) and gone to work in a home for “irrecuperably” disabled children in a village called Ionaseni in Botosani County. A visiting journalist from the Guardian called it “a total disaster zone” as the building had no doors, windows or heating. There were only 3 staff per shift with over 100 physically and mentally disabled kids. All the staff could do was clean and use their mops as a weapon to try and impose some kind of order. Those kids who weren’t paralysed and lying in their own filth would run wild and torture those weaker than themselves. The weapons they fashioned out of bits of wood and metal were ingenious and lethal.

But this kids home wasn’t a disaster zone because it was too small. A bad situation in a kids home, even if it repeated all over the country, will never be considered a disaster and it’s interesting to note that none of the international humanitarian aid agencies came to help in Romania after 1990 because Romania was never considered poor or desperate enough. But there was a huge media story, resulting in a wave of individualistic “Romania” NGOs which would gather volunteers and vehicles and then drove across Europe to help. This “direct aid” hadn’t been possible when disaster struck in African or Asia, locations of the best known disasters, as those places were too far away and risky. Romania was friendly and it became the first “amateur” disaster zone in which anyone could just drive out and help.

A “real” disaster is defined as something terrible that happens to a country, a region or at least a village (think of Mexican mudslides). Most of us think of earthquakes and floods when we think of natural disasters and these are certainly the biggest and most dramatic — and are also the disasters that threaten Romania. Then there are industrial and nuclear disasters that as well as the tens of millions of refugees who have fled from war and humanitarian disaster.

The most striking example of Romania’s apathy are the red dots that are applied to buildings that are at risk. These red dots are a warning that this building is in danger of collapse at the next earthquake and the idea is that people will move out of these blocks, so they can be demolished and rebuilt. But each of these blocks is full of stubborn families who have chosen to face certain death at the “next big one” rather than move on, and official efforts to move them out have floundered. New legislation to force these people out with the help of the Gendarme does not seem to have progressed beyond the proposal phase.

I learned about disaster preparedness in Albania. It was 1999 and this small Balkan country, the poorest place in Europe, had just experienced a massive influx of Kosovar Albanians: almost a million refugees had poured over Albania’s northern border and the international aid agencies rushed in to provide shelter and food. The media were quick to arrive at the remote northern village of Kukes, the base of the refugees and the aid agencies, and soon this unknown village became known across the world thanks to CNN and BBC.

I went to Albania just after the war had ended and the Kosovar Albanians had returned home. I was working for a big humanitarian aid agency called the International Rescue Committee and everyone was expecting another influx of refugess, this time from Montenegro which is home to a Albanian minority — detested by the Serbs/Montenegrans who form the majority. This scenario became the basis of a series of disaster preparedness meetings.

When it comes to humanitarian disasters involving refugees UNHCR (United Nations High Commission for Refugees) is never far from the scene. Although unknown to the general public the UNHCR is a vast network which funds the humanitarian agencies who work in the refugee camps across the world. They have a small presence in countries like Romania where there are asylum seekers, and they fundraise in the rich countries.

I went to several of their disaster preparedness meetings in Albania where I learned the principles of disaster preparedness. The most useful thing that I learned was the attitude you need to adopt in order to thrive in a disaster. I would sum this attitude up as being calm, flexible and ready for anything and it is best understood by imagining the attitude a fireman or soldier has; he must have the patience to hang around for days, if not months, when nothing is happening, and the ability to jump into action when disaster strikes. Above all he must stay calm and at the end of the day he has to “wind down” and relax as if he’s been out for normal days work. I must say now that I have never been a fireman, a soldier I have never experienced a real crisis or war, and have no claim to be a hero, but I did learn from these people.

The first thing that happened in that UNHCR-chaired meeting was that all the agencies present were asked “what communication and transportation equipment do you have?”. A list of radios and vehicles was drawn up. Another list of contact details was written up, printed and circulated. This information forms the basis of disaster preparedness and this is how it works: when a refugee type disaster strikes the first thing to be disrupted are the roads and the telephone networks. Chaos ensues and if the aid agencies didn’t rely on bulky short wave radios (installed in each vehicle) to communicate when the civilian networks are down they would be useless. The purpose of our first meeting was to make sure that each agency had everyone else’s short wave radio contact details as well as a list of what radios and vehicles were available. Until that meeting was called nobody had drawn up such a list.

Some years later I was able to use this experience in Romania, where I was hired as a communication expert on a World Bank project to write a communication plan for the public authorities which are responsible for disasters — the Inspectorates for Emergency Situations in each and every county in Romania, an institution that has responsibility for the fire services as well as disaster relief in case of floods, fires, earthquakes or industrial accidents. The communication plan was adopted into legislation by the Romanian government and now each county has a copy sitting on its shelf. What I don’t know is have they read the plan? Do they know it? Do they practise it and are they ready to communicate in the event of a disaster?

Communication is an essential part of disaster preparedness as well as all humanitarian efforts that come after. Without good communication you don’t know where the biggest problems are, there is no way to coordinate things and many more people will die as a result. Our strategy called for each county to appoint one leader of the disaster committee and one spokesperson. Both would have complete authority over the situation and politicians would not be allowed to make decisions or interfere when they showed up for photo opportunities. Having one good spokesperson can make a huge difference when it comes to handling the international media, which is an unruly beast, as well as international aid agencies.  Without good communication you can end up with Haiti style chaos.

It’s good to have a disaster preparedness plan as it can help you survive (even thrive) in a crisis. But a plan like this is only useful if it is practised and everyone knows about it. Romania is not good at this but the Americans are, and it was the USA that I looked to for inspiration. One of the most useful sources of information that I found was the American Red Cross as they take disaster preparedness seriously and manage to spread the information to a very local level. Plans have been prepared by millions of American families, companies, institutions, cities and states. And they practice their plans.

I remember being at high school when the alarm bell went and we all had to walk outside and line up in groups in front of the school; the teacher would count us, the fire brigade would put in an appearance and then we’d all be told it was a test — which was fine by us as it meant you missed a lesson. And these communication plans need to be practised so that everyone knows their roles in a crisis (and the plan calls for new roles when the crisis hits; everyone must know in advance who is the spokesperson and who is in charge).

If these plans aren’t taken seriously, understood and practised frequently chaos will be the guaranteed outcome of any disaster. I have noticed that some countries really exceed at disaster preparedness — including countries like Greece which have suffered badly from earthquakes — but I am afraid for Romania when the next big earthquake hits because not only are these plans not practised (or even known about in many cases) but the Romanian public authorities seem to be unable to cooperate with each other even in the face of a major disaster. I doubt that anyone has gone through that simple exercise I did in Albania — making a list of all the short wave radios that could be used in the event of a disaster — not to mention worked out who should be responsibile for what. It’s a disaster.

5 Responses to It’s a disaster