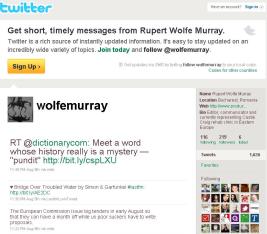 Over the last year I’ve become a keen user of Twitter.  My friends and family make disparaging remarks such as “Twitter is for self promotional egomaniacs” and “Why don’t you use Facebook like the rest of us?”  But I don’t mind such criticism as most of those who make them have either not used Twitter or are not suited to it.

Everyone’s heard of Twitter but not everyone knows what it is. A two word definition is that it’s a “Micro Blog”, in other words a means of publishing short statements.  Its unique feature is that you can only write 140 characters (about a line and a half of text on a Word document). And that’s it. The discipline and challenge of Twitter is to summarise books, films and opinions into 140 characters.  The basic action you take is to “follow” someone (usually a friend or someone famous) and hopefully people start following you.

I can’t remember why I signed up to Twitter but I do remember getting an email saying “Edward Lucas is following you on Twitter” and it stopped me in my tracks.  Edward Lucas, the International Editor of the Economist, prolific writer on Central and Eastern European issues, enemy of the Kremlin and friend of Google, following me?  Why on earth would he follow me? At that stage I hadn’t written anything.  I was flattered, flabbergasted, amazed – and driven to write something worth reading.

Thus began my career as a micro blogger and now, a year and a bit later, I have written over 1,500 short statements ranging from the banal (“I’m on the train to Galati and I forgot my book”) to what I think are interesting views on news and current events; short reviews of films and books (“Film day. Took the kids to see Eclipse. Not bad. Then saw one of my all time favourites: Bagdad Café”).  If I find something interesting online I shorten the link (using www.bit.ly), take a quote from the article and insert it.  My next Tweet will be a quote from Andrei Plesu’s biblical denunciation of the TV host Dan Diaconescu (“Bad taste, trivial, intellectually under nourished, playing with libel, filth”) with a shortened link (http://bit.ly/9iX6B4) to the article in Dilemma Veche.

Why do I do it?  I am one of those people who likes to share interesting things that I come across.  You know the type, one of those people who sends round silly jokes or photos by email, or links to news stories.  The problem with sending people emails like that is that you’re never really sure if they are actually interested in your jokes/photos, but with Twitter you can put all that stuff into one place and people can choose to follow you if they want (interestingly, none of my family follow me but 215 strangers do).

It’s become painfully clear to me that Twitter is ideally suited to certain people, and my attempts to convert my friends and family to it have failed miserably.  Twitter is ideal for the obsessive web surfer or people like me who are creative in an amateur sort of way (I use it to promote my articles or slideshows on Youtube).  But I realise that most people don’t have this irrational urge to share information with strangers and I respect people who choose not to use any social networks at all.  What I find sad is when people feel pressurised to set up a Facebook or Twitter account and then don’t do anything with them.

Twitter started out as a personal communication tool but it has quickly made the transition to the business sector.  PR and communication consultants everywhere are telling their clients that social networks are a cheap way to increase website traffic, build a new following and make the world a bright and shiny place.  But, as you can imagine, it’s not quite as simple as that.  The same could be said about websites, or company newsletters for that matter, and experience shows that if you don’t invest in the right person it’s a complete waste of time.  All you need is a good editor (ideally a former journalist) but very few companies are willing to invest in this, even though it’s a lot cheaper than advertising.  This is the kind of task that “anyone can do” and when everyone is asked to contribute, nobody does.

The typical scenario is that a company has one overworked marketing person and all these new initiatives get dumped on her plate (and it’s usually a she).  Of course she doesn’t have time to update the Twitter account, “but the chairman was told we’ve got to have one and he gave the order. What can I do?”  Often it’s just another burden.

As a PR consultant, I tell my clients that they probably have one or two “natural born Twitterers” amongst their staff, extrovert types who can get into the spirit of Twitter.  Interesting things are happening in all organisations and if someone can summarise these micro events into Twitter it can be a useful way to keep people informed (and hopefully even inspired).  But the problem is office politics.  If Employee X starts Tweeting about company news or puts forward an opinion, the chances are that Employee Y will feel resentful and start spreading rumours that Ms X is getting above herself.  This can kill the initiative dead.

The dominant species in the social network ecosystem are young people.  Today’s students have grown up with Twitter and Facebook and it’s second nature for them to use these tools to chat, share, communicate and organise.  Whenever I advise companies about social networks, and they complain that they can’t afford to hire someone, I point out that there are thousands of students out there who are desperate to get some work experience even if it is on a voluntary basis.  What better way of giving young people an opportunity and getting an expert to run your social networks.

Rupert Wolfe Murray can be followed on Twitter @wolfemurray